3D animation once heralded as the newcomer to the animation industry, has become the standard for animation now that technology and accessibility have caught up. With applications in industries such as cinema, television, gaming, and more recently the push for Virtual Reality (VR) and Augmented Reality (AR), 3D animation has reached new heights. Their story is reminiscent of the rise of 3D scanning. Both innovative technologies are directly related to the power and cost of computer hardware and a once inaccessible technology becomes more accessible to the masses and the technology booms. To many the rise in these 2 technologies seemed to have happened overnight, but that couldn’t be further from the truth. Both technologies have grown to a point where their applications for the mainstream market are flourishing and its almost poetic how well 3D scanning and 3D animation go hand in hand. The most demanding 3D animation applications, AR/VR applications, thrive on how immersive and detailed their environments and assets are. But to hand draw, design, and model life-like objects can be extremely time consuming. 3D scanners like the EinScan Pro 2X line excel at capturing real world geometry, organic shapes, and even people with hyper-realistic detail. 3D scanners have made realistic 3D animation more accessible than it has ever been.

Nowadays, movies, animations and virtual game are bringing more delicate picture effects to audiences, making the character, emotions, and environments more realistic than ever before. With these immersive experiences, audiences can better understand and interact with these environments and audiences are pushing for these more detailed experiences. SHINING 3D has adopted high-precision 3D scanning technologies for real object-based content creation in VR/AR. Photorealistic 3D models can be created within minutes, rather than the multiple days it could take to handmake the very same assets using traditional methods.
Below we’ll explore just how well the EinScan Pro 2X Plus multi-functional 3D scanner integrates with 3D animation for even the most demanding VR and AR applications.

Create a sketch of the desired scene or environment. Nothing fancy, but something to determine what needs to be 3D scanned and modeled. In this instance, the sketch portrays a human figure riding on the back of a dinosaur in front of a giant bug. Take note of the mountainous/rocky terrain in the sketch as this will need to be recreated as well. 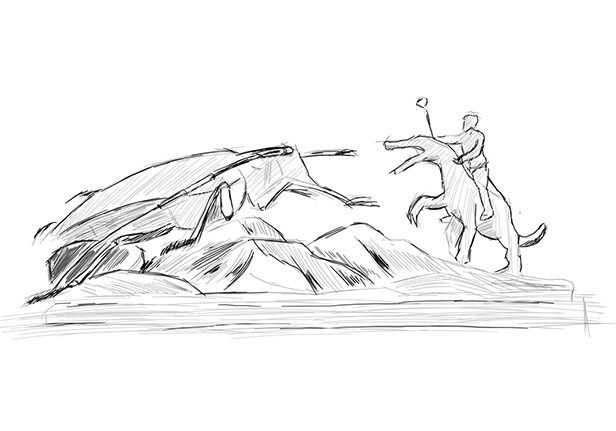 Once the sketch is created you can begin scanning your desired objects to match the sketch. 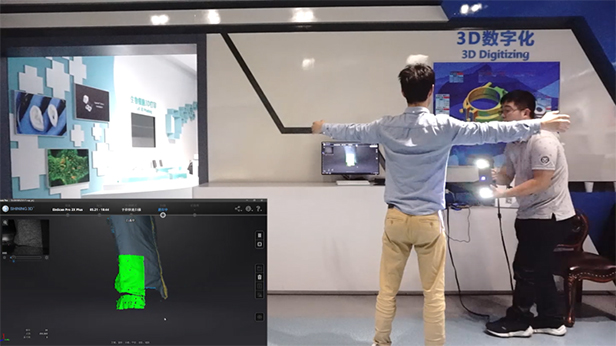 This first image shows the capture of a human body in a T-pose. The completed 3D model can be further designed and manipulated in design software giving the artist complete control over new asset. Scanning a person and converting them into a usable 3D model like this is much faster than what traditional design methods are capable of. 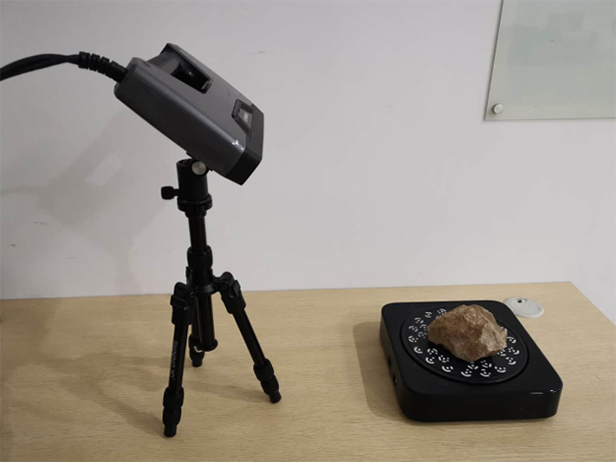 For the remaining items, the dinosaur, and rocky terrain, the EinScan Pro 2X’s Industrial Pack add-on (tripod and automated turntable) is used. The resulting models can be scaled to size and exported directly as 3D models into your designated 3D design software and workflow. 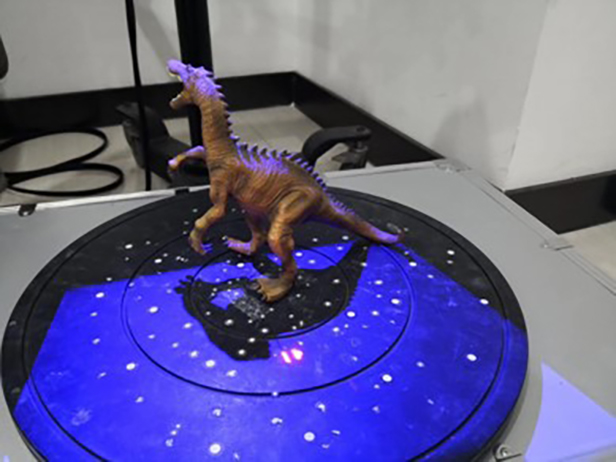 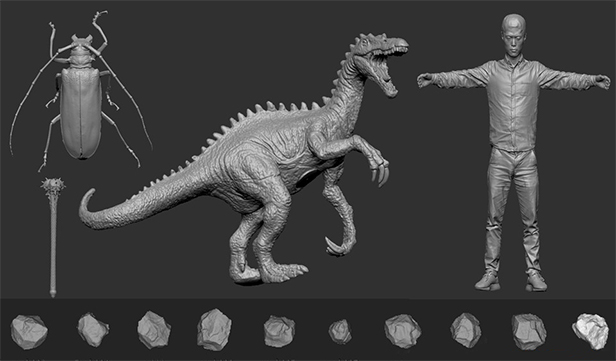 For this particular application the objects were imported directly into ZBrush. The Size and position of the models were all adjusted accordingly. 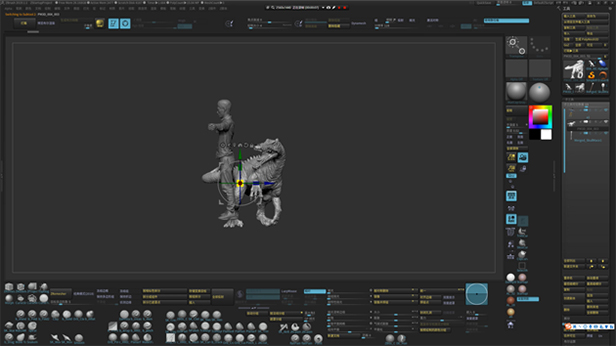 Adjust the size ratio between components by zooming. 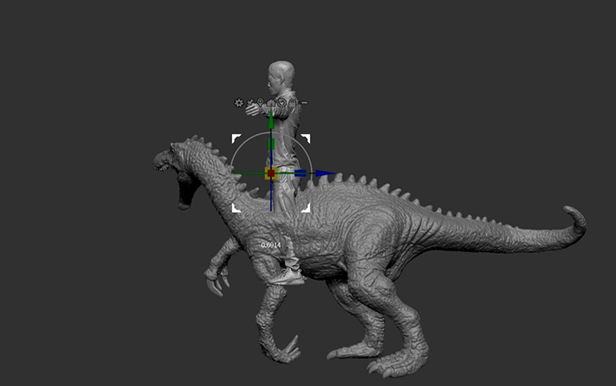 Adjust the positional relationship between components by using the coordinate transformation function. 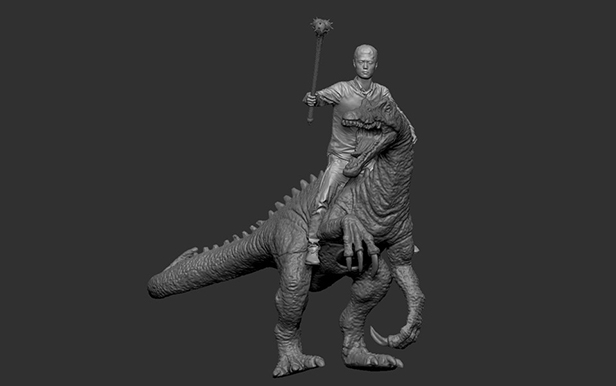 Adjust character’s pose & match insect’s size.
Use a mask to adjust the posture of the human body to ride on the dinosaur. Repair the joint deformation with an engraving brush. 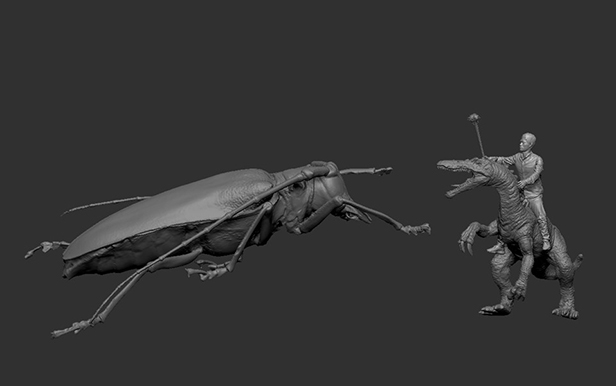 Zoom in on the insect model and adjust the corresponding ratio completing the action sequence of the scene. From here the models just need to be added to the terrain. 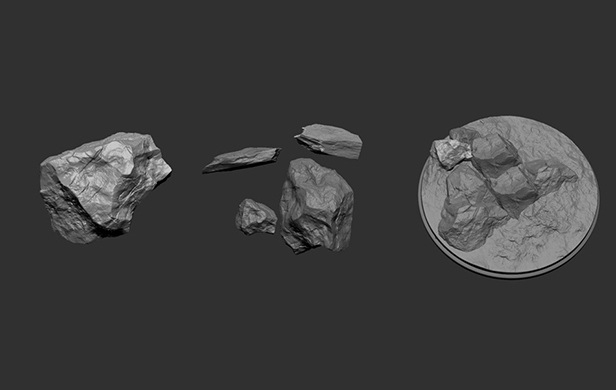 Make a platform and place a 3D model of the 3D scan data from the rock. Adjust the size and angle of the rock to give a sense of realism and scale. 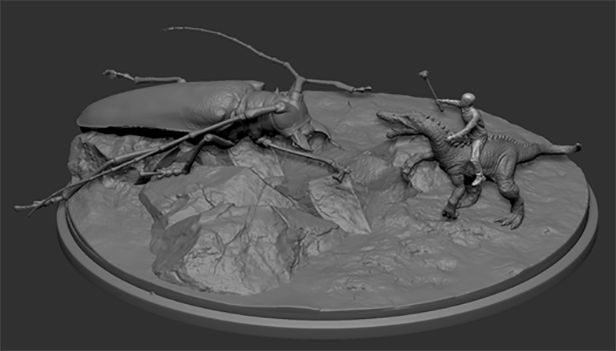 The completed scene is as realistic as their real-world counterparts. The modifications that have been made to the scan data completed the scene in a fraction of the time that traditional methods would take.
Projects like these just scratch the surface of what can be accomplished with 3D scanning. Other applications for the technology include character face change/mapping and the animation of 3D models. Whether you’re looking for more information on these applications or one of the other many industries that 3D scanning has revolutionized, feel free to contact us directly at sales@shining3d.com .