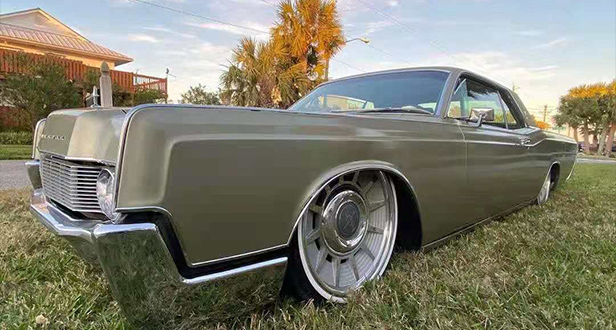 Lincoln Continental is a series of  luxury cars produced by Lincoln, a division of the American automaker Ford Motor Company. The exterior was given European “continental” styling elements, including a rear-mounted spare tire, expressing the model´s name in the product itself. As part of its entry into full-scale production, the first-generation Continental was the progenitor of an entirely new automotive segment, the personal luxury car. Following World War II, the segment evolved into coupes and convertibles larger than sports cars and grand touring cars with an emphasis on features, styling, and comfort over performance and handling.

In Bryan Fuller´s automotive and motorcycle design and customization shop “Fuller Moto” a Lincoln Continental Two Door Coupe from 1967 got a lovely makeover. With the help of EinScan Pro 2X Plus Multifunctional Handheld 3D Scanner from SHINING 3D, the car icon received an authentic interior upgrade.

In the course of turning the Lincoln into a “rolling work of art” Fuller and his team scanned the interior of the car, in particular the footwell. Bigger speakers have been added in this area and thus the old kick panels won´t fit anymore. So the team opted for 3D scanning the panels to create some custom kick panels for this extraordinary vehicle.

“By Scanning we’re able to accurately reproduce the area with little to no labor and have a perfect fit for both sides!” – Bryan Fuller, Master Custom Builder & TV Personality

After the acquisition of the data and the design of the new panels based on the results delivered by the EinScan Pro 2X Plus , Fuller´s team 3D printed kick panels, specially designed to exactly fit the footwell of the Lincoln Continental.

“By using the scanner we can get all the data much easier than the old school methods of paper and cardboard patterns.  Also, by printing the panel instead of making them out of metal we can make an intricate grill that would be too hard the old way.”  – Bryan Fuller, Master Custom Builder & TV Personality

“We have been very happy with how our EinScan worked and how easy the software has been to use!  I would happily encourage anyone measuring complex items to invest the nominal amount of capital these units will save you. The Shining 3D EinScan has totally changed the way we think about measuring, designing, building, and engineering our vehicles from conception to final assembly!” -Bryan Fuller,  Master Custom Builder and TV Personality

For more information on Bryan Fuller and his journey with EinScan, head to @fullermoto on Instagram.