Some projects are amazing not because of their complexity, but due to its clarity: this wheel fender was scanned and designed for widebody kits, and the final product was inverted and molded on a 3D printed base.

The project was carried out by Edward Van Zyl from Manitoba, Canada. As a specialist in 3D printing and 3D scanning, Edward met a client who wanted to convert his car into a tube chassis race car.

“The client wanted to add a widebody kit to his car,” Edward explains, “and the owner thought it would be a cool idea if it could be 3D scanned and 3D printed, so he came to us.” A few months ago, Edward’s company, Dreamworks 3D Printing, purchased an EinScan HX, a new piece of equipment they hope to use to take on this task.

The EinScan HX is ideal for 3D scanning of complex parts of large objects or small components with precise details. EinScan HX captures data with high resolution and sub-millimeter accuracy and is suitable for scanning black and reflective surfaces. Therefore, making it ideal for the industrial and automotive industries, meeting the needs of 3D scanning in scenarios such as mechanical and automotive parts.

Automotive modifications start with 3D scanning. Although, at first glance, the black surfaces of the parts appear difficult to scan, they are not a problem. “To get better data, we paste some marker on the surface of the car,” Edward said. The EinScan HX proved to be able to scan the surfaces of black reflective objects smoothly.

“We thought it would be an interesting idea to scan, so we also scanned the entire body to see if this scanner could accomplish such a challenge, even though our job actually only required data near the wheels.” Edward used the EinScan HX scanned the engine at the same time. “The scan went very well overall, and the EinScan HX worked amazingly well to get data quickly, even for large or delicate objects.”

Edward imported the data of both sides of the body into Fusion 360 and Blender for design. Based on the original bodywork, he designed an outward extension, commonly referred to as a widebody kit. “As you can see, without the assistance of 3D scanning, we would have needed to model from scratch, which would have definitely slowed down the process.” 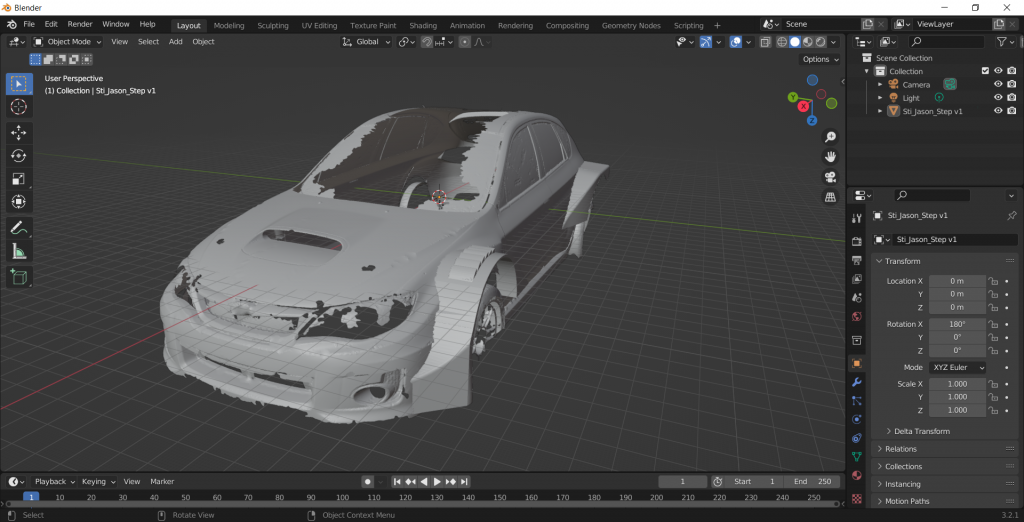 After the design was completed, Edward used 3D printers to print out the parts and put them together. After they were attached to the body, the body shell was inverted and the final body was made from fiberglass. After covering the tires with the widebody kit, the vehicle can not only eliminate turbulence when driving at high speed, but also increase the high-speed downforce of the car to a certain extent.

“We will bring this car to the show and we hope to convey the capability of 3D scanning and 3D printing to everyone”, Edward added, “We believe such process will become an important way of race tuning. “Compared to traditional methods, high-precision 3D digital solutions advance the development of a retrofit manufacturing process for the rapid acquisition of 3D data, intelligent design, and production of racing prototypes, resulting in significant savings in assembly costs, manual labor costs, time costs, and material costs.