For the individual business owner involved in car maintaining and repairing, knowing the data of the original car, and comparing it to the current vehicle can be a great help in their work. This not only helps them understand the extent of the damage to the car, but also aids in possible future restoration work.

Raimo Haljas from Estonia owns Rebelliontech OÜ, a small car modification company that maintains and repairs motor vehicles as its main business. They came across a car that had been brought in for a routine inspection, during which they noticed something suspicious about the bodywork. Upon closer inspection, the car had been involved in a major side collision. In addition to the accident, the car had many areas that needed repair and rust removal, which is why they decided to disassemble the car into different parts and begin restoration.

Raimo Haljas wanted to be able to compare the essential point data of the current car with the factory data to understand the extent of deformation and to plan his restoration. Therefore, he chose to use 3D scanning to assist in this project.

Raimo disassembles the body while the chassi is mounted on a separate rotating frame and the body is thoroughly cleaned. After the body is dry, markers are applied to the frame and scanning can begin.

The body Raimo was scanned using EinScan Pro 2X Plus, and basic calibration was performed using the software that came with it.

“Scanning with EinScan Pro 2X Plus is easier, more accurate and faster than using manual measurement. The amount of data is greater when scanning, and comparing the data with the donor vehicle body gives a better insight to find and diagnose areas that need restoration.” Raimo described the working process. 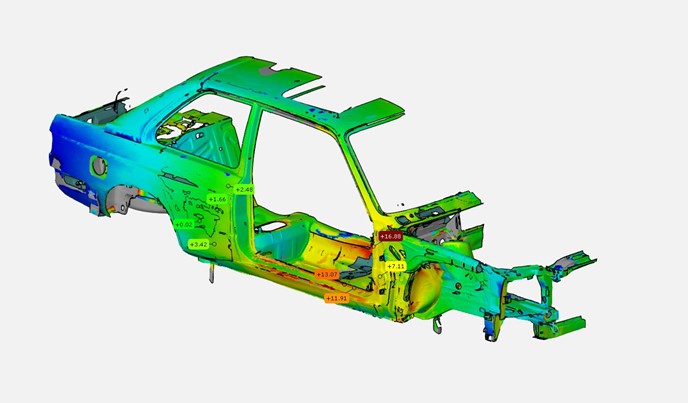 “The scanner helped by getting us the surface scan of the vehicle and comparing it with the donor. After comparing, we used 3D scanning every time after the chassi was stretched closer and closer to its factory specs”, Raimo adds, “The average measurement result differed from the factory measurements by 0.05 mm. We were extremely happy with the results!”

Bringing digital workflow with 3D scanning technology to reproduce the spare parts that are no longer available, we can start with the original part, even if they are damaged. 3D Scanner is now becoming a significant tool in the automotive industry for repairing and reconstruction, restoration, and also customization.

Note: The 3D scanner mentioned in the article has been updated, for more information, please check: EinScan Pro 2X 2020 and EinScan Pro HD.