A Sacagawea (also spelled Sacajawea), Lewis and Clark Statue was taken down in Charlottesville, Virginia on July 10th, 2021.

According to historians, Native American partner Sacagawea was a guide and interpreter for Meriwether Lewis and William Clark and is depicted as pointing out the path and track they should follow. Sacajawea was a big help with the Lewis & Clark expedition, but instead of being represented as a strong Native American woman, many people feel like this statue is showcasing her in a negative way. The bronze statue, built in 1919, sits on a 6-foot pedestal above a major downtown traffic artery. Charlottesville City Hall eventually decided to remove the statue and melt it according to the polls.

But before it is melted down, Alexandria Searls, a staff member at the Lewis and Clark Discovery Center, called for at least a part of the statue to be preserved and archived as a digital collection for academic purposes and digital modification in the future.

Due to its size, location, and the complexity of its texture, the scanning of The Sacagawea, Lewis and Clark Statue posed certain challenges: 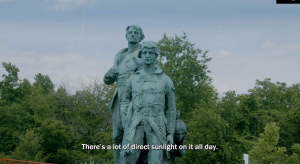 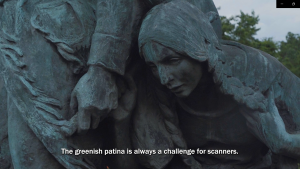 After assessing the complexity of the job, it became clear that the highest quality tools were needed to digitize the statue, and the museum turned to 3D Print RVA. Jeff Johnson, the head of 3D Print RVA, was immediately brought on board for the project.

After a thorough examination of the statue, Jeff decided that the EinScan HX was the best scanner for the job. This Handheld 3D Scanner innovatively integrates a blue laser and blue LED for both accuracy and scanning speed.

Laser scanning is less sensitive to ambient light and performs better on reflective and dark surfaces.

“What makes it different than the previous scanners I’ve been using is that it handles darker-color objects. The greenish patina is always a challenge for scanners. And the blue laser mode seems to handle it very well. The HX does handle brighter-light situations. It allows me to be able to be a little bit more versatile for the time of day in scanning for something outdoors.”

Using the LED light mode, Jeff is able to capture the color texture and general topography of sculptures. Because of the EinScan HX’s large field of view, Jeff can scan things faster, which makes it particularly well-suited for capturing a variety of historical artifacts, sculptures, and monuments.

With the help of the EinScan HX 3D scanner, the statue was preserved in its entirety. The statue stands 8 feet 4 inches tall and is covered in more than 100 years of soot and patina. Half of the scanning took place on a ladder on uneven ground. The saved file for the whole statue is 385.2 GB, which is a huge scan project. Jeff completed the whole project into 4 different sessions and saved them separately, doing post-processing of aligning, cleaning and blending multiple scans in Geomagic Essentials.

“For something this large, I usually scan the body of the statue at a lower resolution, then scan the hands, face and anything with text at the highest resolution, basically anything else with high detail or focus of the piece, and then merge everything together in Geomagic Essentials. Most people who view the statue focus on the face, hands and text, and that seems to be where the sculptor focuses his time.” Jeff Johnson says.

In this changing social environment and climate, historical monuments in the outdoors need to be preserved and for archival purposes, they need to be scanned accurately and vividly and saved in the museum’s database for display on the website or for virtual interaction. EinScan HX 3D scanner offers museums such opportunity to do just that.

According to the Lewis and Clark Exploratory Center staff, Alexandria, sculpting students at a university in the region will design a standing version of Sacagawea. They hope the kneeling version will be cut from the statue, while the standing version will be put in its place. That way, Sacagawea would appear more equal to the two white men. The body parts that could not be used would be melted down and added to other bronze statues.

Alexandria explained about this project: “I think 3D scanning really should be part of due diligence. Because we live in a tumultuous time, both our society but also with our climate change. We don’t know what is going to be preserved.”

According to the National Women’s History Museum, Sacagawea was Lewis and Clark’s interpreter and guide when they were commissioned by President Thomas Jefferson to explore the American West. the National American Woman Suffrage Association of the early 20th century adopted her as a symbol of women’s worth and independence, erecting several statues and plaques in her memory, and doing much to recount her accomplishments.