Our story begins with an 800-student Hangzhou, Xingzhi High school, honoring the merits of the educator Tao Xingzhi (1891-1946). The great Chinese patriot Tao Xingzhi was an educator, ideologist and a leader of the National Salvation Association and the China Democratic League. In terms of education, his theory of “life and education theory-popularizing mass education” set an example for modern Chinese education. Xingzhi High School has always followed his education thoughts since its foundation and therefore attaches great importance to the reconstruction of his namesake memorial hall.

Recently, Xingzhi High School began a comprehensive restoration of their Memorial Hall. Unfortunately, prior to the restoration efforts began, the original Tao Xingzhi Statue suffered damage as a result of an accident. Since the statue has special significance for the school, it became a shared challenge for both staff and students to work together in “The quest to restore Xingzhi High School’s symbolic statue”. 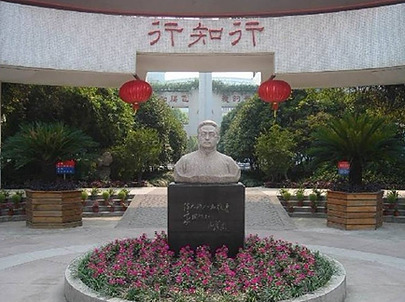 One of the faculty goals for the restoration was to combine it with lectures about 3D that would enhance students’ exploration into the exciting world of 3D scanning and 3D printing. The school’s 3D Creativity Association cooperated with the SHINING 3D team to ensure that students gained valuable experience and knowhow through their hands-on scanning efforts.

The School already owned a number of EinStart-S desktop 3D printers which would be used by the 3D Creativity Association for restoring the statue with 3D scanning technology. Under pressure to finish the restoration prior to the reopening of the Hall, they contacted SHINING 3D for help. SHINING 3D decided to use the EinScan-Pro multi-functional handheld 3D scanner to acquire the statue surface data for digital modeling and archival

The original Tao Xingzhi Statue was 90 cm long by 40 cm wide by 80 cm high and had been severely weather damaged which made the restoration efforts even more difficult. The 3D Creativity Association planned to use the latest 3D digital technology to scan and print the statue in a 1:1 scale.

By operating the EinScan-Pro by themselves, the students learned valuable lessons. The gained insight into how to capture real world objects and how to save them for use in the 3D digital realm. Prior to the restoration project, many students thought that the only way to create 3D models was by using CAD (Computer-Aided Design) modeling software. All the models created by 3D scanning would be sent directly to a 3D printer. So, the quest to recreate their beloved statue, would also teach about 3D printing. 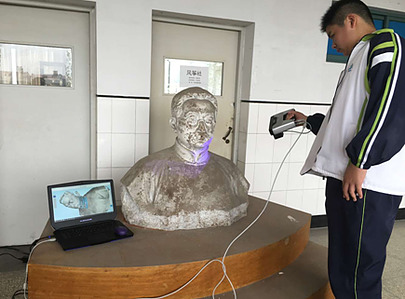 Initially, the student seemed shy about using advanced 3D scanning technology but because the fast scanning mode of the EinScan-Pro is simple to use, they became increasingly enthusiastic after about 10 minutes. Furthermore, EinScan-Pro technology doesn’t require any marker point placement or pre-spraying of a development agent. This makes the EinScan-Pro suitable for scanning large parts, human bodies and statues. In this particular case, the entire scanning process only took 5 minutes using a scanning speed of 10 fps.

The EinScan-Pro supports fully-automatic mosaic creation which can be output as individual, print-ready 3D data files. After successful model acquisition, the EinScan-Pro calculated and stored a digital 3D model for restorative modeling of the damaged statue parts. 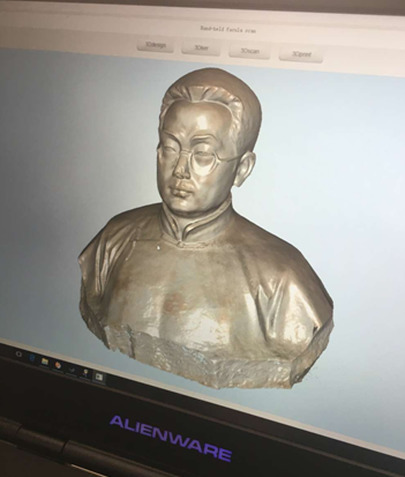 Due to the statue’s large size, the team decided to use FFF 3D printing technology. Fused Filament Fabrication is a 3D printing process that forces a continuous filament of a molten material out of the print nozzle to be deposited on the growing statue part. The Shining 3D EinStart-L used PLA material to print each mosaic-part which was then carefully assembled to create the full-scale replica. 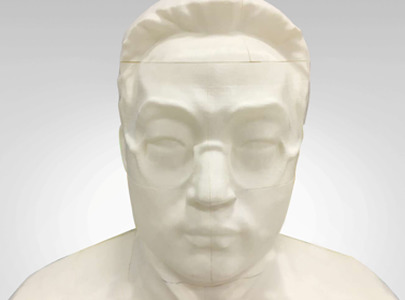 After splicing, polishing and coloring, the 3D-printed Tao Xingzhi Statue was finally complete. The staff and students were overjoyed at the sight of the brand new statue that had been replicated entirely using Shining 3D scan and print technology. 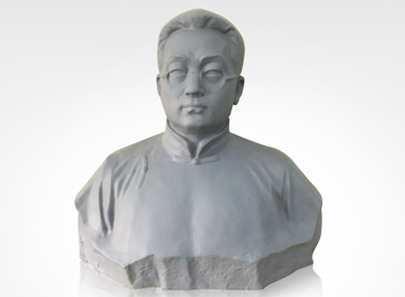 The entire school held a ceremony to honor the restored Tao Xingzhi Statue in its new home in the Memorial Hall. 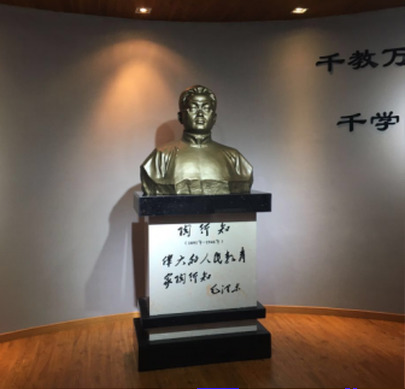 “The statue serves to remind both faculty and students to pay tribute to Tao Xingzhi and practice his teachings, “Acting is the beginning of knowledge while knowledge is the outcome of acting”

Benefit: Education, Historic Value, Honoring the merits of an Educator